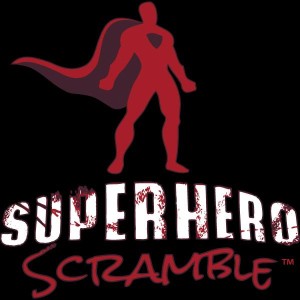 * Event Details
I need to be fully honest before I start the review. Superhero Scramble is my favorite race! I ran two last year and LOVED them, I just had a great time at both events, LOVE the Superhero theme and have many awesome free pics. Also, I have tried to work for them and with them because I personally want them to succeed and have been brushed away. For Jesse this was his first so has no prior knowledge.

The parking situation was an absolute DISASTER. It took 25 minutes from entering the park gates to travel roughly 1/4 mile to pay the TWO attendants collecting money. My problem with this was they had three booths right as you entered the park with volunteers in them just smiling at you, why would you not man them with people collecting money? Why would you create a HUGE backup when it easily could have been somewhat alleviated? Why would you aggravate people right as they enter your “World Championship”?

The overall check in process was ok, not great. Certainly could have used some help. Bibs, timing chips came from different people, and no packets. There were no volunteers telling people to sign waivers. This wasn’t terrible but this was a “World Championship” event!

Vendors were usual you would see at an OCR, Muscle Milk, CiCo etc. No problems here.

I LOVE the Superhero Schwag!!! Mainly cause green is my favorite color, yeah shocking! Medal was cool, definitely different with the red and the t-shirt was nice!

MAJOR problem: Showers, or should I say a dripping hose, yes ONE. Enough said there.

* Race Details
Alright so this is where it goes bad and at times REALLY bad. The course was advertised as 13+ miles and 25 obstacles. I had 18.4 miles on my GPS and there was roughly 25 obstacles, but 25 obstacles spread out over 18 miles leaves a LOT of running. The best obstacles, Superslide, the big cargo net contraption, a nice fire jump into a water pit and a few others were all right at the very end of the race. It also at times honestly felt like a “wanna be Spartan”. They had a cinder block drag with a chain, sand bag carry around some loop and then a random grab a bucket, walk to the pond, fill it half way, walk around in a circle, then dump it out. Also, they had an ice pool at the end, yes a Tough Mudder rip off. From an RD’s perspective there was VERY little creativity and just seemed like random things thrown in there just to do it and add “obstacles”. Again, NOT what you expect from and “World Championship” and a race trying to be a major player in the OCR market. The
course was FLAT, which is ok, you can only do what you can do, but it was switchback after switchback on single track path and legit at times you could get dizzy! There was a few “open” areas that were EXTREMELY poorly marked with what looked like flags to indicate a sprinkler head in the ground. At times, it was nearly impossible to navigate.

There was also the most dangerous, reckless, ridiculous obstacle I have ever seen. The leap of faith took you into a pond that was somewhere a 1/3 to a 1/2 mile across, that you had to swim. This came roughly about 5.5 miles in on the course. I saw THREE lifeguards and a scuba diver at the very beginning. Yes my friends, THREE lifeguards and one scuba diver were supposed to be protecting close to 100 people at a time, and maybe more, in the water. The pond was dark, extremely tough to navigate and over 100′ deep at points. The most reckless part is that a PFD was almost non-existent. Now there was a rope that went across that you could “kind of” grasp on too, but it had no flotation devices on it and was fully submerged. My first lap I got half way out, cramped, started yelling and thankfully was brought one, but thats how you get them? Almost drown and we’ll bring you one?. I honestly saw maybe 8 of them on the two laps I did. The second lap Jesse and I got into it
with an employee and he honestly said to us, “well why didn’t you bring your own”? I had to restrain Jesse at that point, being our second lap, over 13 miles in and facing that swim, emotions were running high. Then Jesse jumps in the water and the scuba diver tells him NOT to touch the rope, just amazing. I think my biggest issue with this is from an RD perspective. This group of people sat in a meeting, looked at each other and concluded that THIS swim and obstacle was a good idea, and SAFE. Words can’t describe the recklessness of their behavior and CLEARLY safety is not a top priority.

I also had a MAJOR problem with the fact that the Villain was just two laps of the Intimidator, with only doing the end obstacles, which were the best, once. Now again, they were limited on space at Quiet Waters Park, ok I understand, BUT WHY CALL IT THE BIG VILLAIN IF ITS JUST TWO LAPS. I HATE, double laps of one course and calling it something else. In my opinion it was a pathetic attempt to have a Villain after the race in Chicago a few months back was canceled and an attempt to be “Spartan” with three races. Again, NOT what is expected from a “World Championship”.

I honestly feel, overall, that this was a marginal “local” OCR. The only problem is this was a supposed “BIG BOY” and major player in the OCR world hosting a “World Championship” marquee event, IN THEIR OWN BACKYARD!!!! If they can’t pull off and nail an event in Florida, I fear what they can do when they travel and unfortunately I think we have all seen that with the events they have canceled. From what I heard from a reliable source this was their biggest event with over 2,500 runners, I can’t imagine from what I experienced this will help them in the future. Plain and simple it was a “World Class Failure” and I am more disappointed than anything.

I also spoke with another runner, who has a SuperTatt, (not Mario) who said he would NEVER run another Superhero Scramble, and he gets them for free!!! Not good.

Again, I am disappointed, I want this race to KILL it, I love the overall concept, however all they seem to do is kill themselves.