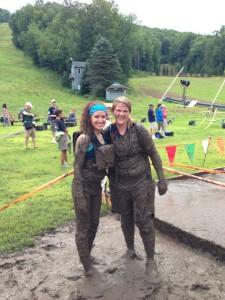 * Event Details
Parking – Right at Ski Sundown. $10 but you’re literally steps away from registration. It’s a small lot, so if the race ever garners enough interest, they may have to seek an alternate lot or venue.

Facilities – Small, but there aren’t many people so it’s not really an issue. Only a couple of waves, I think every racer had crossed the finish line by about noon.

Vendors – Wasn’t much of anything as far as vendors or post-race festivities. It was basically a hose-off station and a spot to pick-up your swag.

Swag – Cotton tshirt, same as last year’s. Ran out of small size so I grabbed a youth large and will probably cut it up into a gym tank. Medals were almost exactly the same, but they added the race name and year to the ribbon and the word “finisher” was engraved on the back. I always love races with bling, so that’s a draw for me.

* Race Details
Course – Always love races at ski resorts that utilize the hills. They did a good job of using the terrain I thought. Last year we started the race by going straight up Gun Barrel, which was brutal, but this year it was about halfway through the course and there was an obstacle about halfway up to break up the climb a bit.

Obstacles – Not too many and none were too difficult, but I liked them all the same. I was wearing a weighted vest, so that added to the difficulty for me anyway. There were short walls, over&through walls (no under), a rope assisted wall with a ranger bar descent, an inverse wall (you go up the back side), tire swing (my favorite), water crossing, a balance beam, tunnel crawl through (which you then went over during another part of the course), and the finish line was the nastiest, clumpiest mud pit I’d ever seen. They took out my favorite obstacle from last year: you were outfitted with laser tag equipment (a gun and a chest strap) and you had pick a row of hay bales to run down and shoot the target at the end without getting hit by the guards.

This race is untimed, they don’t even have a clock at the finish line. The goal of the race is to escape from prison, so you start the race wearing a flag football belt with three flags. When you head into the corral, your wrists are tied together with zip ties VERY tightly (they started to cut off my circulation). When your heat starts, the guards throw in some cutters and you have to cut yourself free before climbing over the wall and out on the course. There are three “obstacles” set up on course where there are 2-6 “guards” who try to take your flag as you run past. I made it out with two of my flags, so I avoided the penalty, but if you failed to escape with a flag intact, the penalty was a tractor pull before you could go through the mud pit and finish.