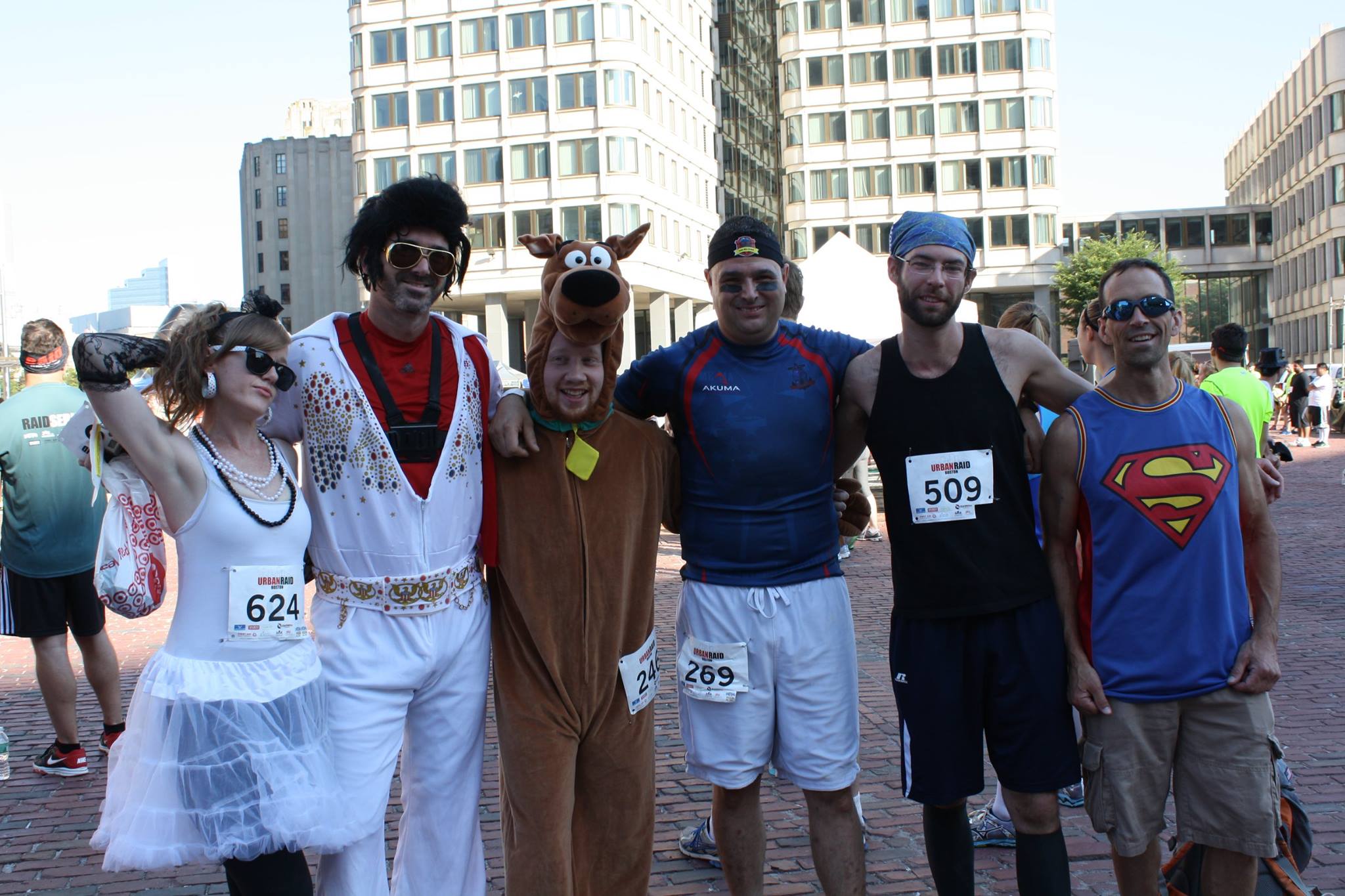 * Event Details
No parking, but it was right off public just a few minute walk from the t, they were close to garages. Did not like that bag check was just a ziplock bag, and no gear bags, but it looked like it was free. Spectators were also free, the dj was playing good music, they did a group warm up wile waiting for the police toclear the roads. They had zico water, naked juice, a new sport recovery drink, of course the army was there. The shirt looked nice it is a tech t, if i would have known i would have paid the extra money when i bought my ticket. At the finish line, no medal (those were saved for the many winners: overall, 4 age groups, divided into gender, team, and a few others) but they gave out water, and an urban raid buff. This an early event only we went to the bar at 11am for the free beer and the race was over by about 1030.

* Race Details
Shorter course, just under 5k. Not many obstacles definitely good for a beginer, only 9 obstacles, it is easier but still a bunch of fun, the cargo net up the side of city hall was awesome! It was weird that one of the streets was not blocked (the fact that they picked that way, not that it was not shut down) but they had police stopping traffic when the walk signal lit up, and you were no longer being timed ( but the discounted time seems off when i compaired the official time vs my gps watch) and they put the water stations in the no time zone. Overall it was a fun race that i will do again, not too challenging, but for the opertunity to fun through boston for abouy 30 bucks for early bird pricing it was worth it, so much fun

* Event Details
Since I live right in Boston and hate driving 1.5 hours to most OCR courses, I signed up for this even though my other OCR friends were out of town — I figured I’d be going for a workout run that day anyway, might as well have some fun and try out this new race. Plus it was only $42 with an Amazon local discount. I didn’t mind that the (free) bag check was only a large ziplock bag, since, with no mud and water obstacles, I didn’t need a towel and whole change of clothes — I only needed to store my phone, wallet, and the event t-shirt.

* Race Details
It wasn’t very challenging (then again, I consider myself “very competitive”, but not “elite”). No crawling obstacles at all — a bunch of medium walls to climb over, some short hurdles, one rope climb, a very large cargo net in an interesting location (climbing to an upper part of City Hall plaza), two tire flips, a balance slack-line walk w/ a rope above you to hold on to, and a mini-rock-climbing wall that taller strong guys could probably leap up and pull themselves over. No mud or water. The course went through the Quincy Market plaza and around Columbus Park, which is pretty neat for an OCR. I think that is what makes Urban Raid unique and interesting — being able to do an OCR right in the heart of a city, which is easy not only for some of us to get to, but also for city friends to come and watch (no spectator fee).

My biggest complaint was that the only heats were between roughly 8 and 9 AM, and you couldn’t choose your heat. The waves started about every 5 minutes, organized by age & sex divisions, plus heats for groups of teams. Only a little more than 500 people entered, so there was no need for later heats, which I would have preferred. And I’m also guessing they have to have the race that early because it crossed two streets that would be too busy to shut down later in the day. One street was closed down completely, the other had mats that paused your time while you waited for the policeman to let you cross.

Also, it seemed like nearly all of the runners finished by 9:45, yet the after-party at a local bar didn’t start till 11? That was very annoying. I didn’t feel like waiting around for another hour so I left, with my unused beer ticket and 2 more that other people had given me because they also didn’t want to wait around.

I might do it again, if it is less than $50, if I can get a lot of friends to do it with me, and if we don’t have to wait over an hour for the post-race party.

* Event Details
On Saturday, some of my fellow Spahtens and I tackled the Urban Raid held in downtown Boston. I had only decided to run it a few days earlier, but because I live in Cambridge it made transportation a breeze by simply hopping on the MBTA. As with most races held in the city, they encouraged you to take public transportation but did provide the names of some nearby garages for those who wanted to simply drive to the venue.

We got to City Hall Plaza where the start and finish were located and picked up our bibs and timing chips without any hassle. I had read in a pre-race e-mail that they weren’t going to have a bag check aside from a Ziploc bag for keys, ID, etc. so I planned accordingly. Had I not known ahead of time this would have been frustrating but I did plan accordingly. They had a number of porta potties nearby in the plaza, and even at the busiest times before the race you never had to wait too long.

For vendors, there were a few giving away samples of their products: Zico coconut water, Naked Juice, and First Aid Shot Therapy (F.A.S.T.) This was the first time I saw the First Aid Shot Therapy at a race, and they were giving away their product of either a muscle recovery or stomach aid shot (think 5-hour energy style) as well as some swag of either a hat or sunglasses. The Army and Air Force were there, as well as someone selling workout style clothing.

As far as swag goes, there wasn’t much at Urban Raid. The T-shirt was an extra $10 during registration or $20 day of the race, so I chose not to get it. Had I known it was going to be a tech T I would have, but you live and you learn. When crossing the finish line, we received a bottle of water and a buff very similar to the one given out at Zombie Charge. Because it was an especially hot morning, this was really helpful when soaked in water to cool down a bit. They had a group warmup before the race to help loosen everybody up. This had been planned for earlier in the morning, but because they had some delays in closing the streets of Boston they changed it on the fly to include everyone and give them some more time. It was a great job of adapting to circumstances. After the race we went over to the Hard Rock Café in Boston for the award ceremony, and more importantly, beer. They had Shipyard Summer, which is wayyyy better than getting a Bud Light or Dos XX, and makes sen
se seeing as how they are a Maine based race company serving a Maine based beer. They did not give medals to all finishers, but rather just handed out medals to the top 3 finishers in each age group and top 3 overall. I know others may be upset about this, but most people signed up for only $30 and they medal they did give out were really nice for those who earned them. I’m personally okay with this as some of these smaller races are focusing on bringing more people in with lower costs and when the time comes, hopefully give out medals when they are a bit bigger and more successful. If you run Tough Mudder, you can’t really complain about no medals at some of these smaller races.

* Race Details
Before I begin describing the course, I should probably acknowledge the fact that I may or may not have (but totally did) run the Urban Raid in a Scooby Doo suit. I believe there is a picture of this if you scroll up to the top. Going in to the race, I knew from reading previous NES community reviews that this course was a bit on the easier side and would not be muddy, so why not dress up for it? The course was a 5K obstacle course starting and finishing at City Hall Plaza, while also taking you down by Faneuil Hall and the Christopher Columbus Waterfront Park. Heats went off about every 5 minutes or so which I thought would lead to some backup at obstacles, but I never really encountered one. We started off by running a bit through the plaza taking the stairs down towards Faneuil and then up again. This lead us back past the starting line, and then all the way around the plaza back to Congress Street. This is where we encountered our first obstacle, the cone hurdles, which
was simply two moderate sized cones with a bar going across the tops that you had to jump over. It wasn’t difficult, but they had enough of them going the entire length of the City Hall building that you definitely felt it when you were finished. We went through the Faneuil area and encountered some marine hurdles we had to jump over, and then we crossed Cross Street and off to Columbus Park. When we crossed the street, they had mats that were supposed to pause our time but based on a friend’s watch I don’t think they actually did that. Here we encountered more marine hurdles and the monkey bars. We went back through Faneuil where we ran to the rope section, where we climbed up a knotted rope onto a platform through a hole in said platform. This was a unique use of the rope climb, as it actually brought you to the next obstacle, where we ‘rappelled’ down a slanted wall and flipped a tire twice. After running a bit back to the plaza, we had a sandbag carry that to
ok us up and down some stairs a pretty decent distance. The most challenging obstacle they had for me was the cargo net, which awesomely had you climbing up the north side of the building. After that was the grand finale, with a slackline you had to cross (with a rope to hold for assistance,) the 8 foot wall, and the finish line. The wall had 4 sections so you could pick your difficulty. 2 had lots of rock climbing holds, 1 had a few spread out, and 1 section didn’t have any.

Overall I thought it was a great race. The obstacles were easy for me, but I knew what to expect going in, which allowed me to have some fun with it. Because I decided to run it the week of the race, I paid the procrastinator’s (and didn’t know about it until now) price. I’m torn if it was worth that, but next year I’ll make sure to get in on the early bird pricing and definitely would love to do it again!!