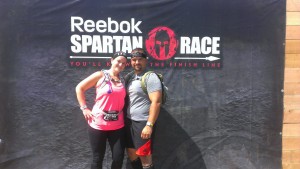 * Event Details
The Utah Spartan Beast was held at Soldier Hollow in Midway, Utah.  This venue is well known for cross country skiing, tubing and snow shoeing. I believe some of the 2002 Winter Olympic Events were heled here.
It was quite intimidating driving in the area, being surrounded by large mountains and gigantic “hills” (as they call them out there), I definitely had a pit in my stomach and was questioning why I had opted to do the Beast.  I felt like I wasn’t adequately prepared and I started to get a bit nervous.
We got dropped off, pretty close to the entrance. As we were walking in (around 10:30 am) we saw some people with finisher medals…I looked over to Jim and said, “hey that’s a good sign, the first heat was 2.5 hours ago and people are done!”  We walked over to ask the two guys we saw about the course and one said “NE Spahtens,” and proceeded to introduced himself as Rick Kraics. He told us a but about the course (just over 12 miles, steep hills, lots of running, etc) we congratulated him on his time–right around 2 hours! (Way to go, Rick!) At this point I breathed a slight sigh of relief, we started to see more and more finishers and I started to get excited.
Right before we arrived at the entrance we saw another familiar face, one that was able to help us get into an earlier heat…”just tell them the tall guy with the red beard said you can jump in an earlier heat.” Thanks to Todd Seldack–we were able to start 45 minutes earlier than our scheduled time. Truthfully, I was scared of the elevation and thought it was going to take us a really long time to complete.

Oops! Got way off track…parking was plentiful and just a short walk to the entrance.

It was the typical Spartan Race Schwag–black cotton t-shirt and medal (this time green!). There was also s headband with your number on it in your packet. The merchandise tent had a bunch of cool stuff, though it seems over priced.  There was not a specific Utah shirt, which we were kind of bummed about since we had gotten the ones specific to NC, Tuxedo, etc. The only Beast shirt they had was black and long sleeved, mind you it was about 105 degrees out there.

We didn’t spend a whole lot of time walking around, checking out vendors, etc as we wanted to get started ASAP, and after the race our ride had been waiting for us and we didn’t want to make them wait much longer.

It was $25 for spectators, which seems a bit outrageous. Had it been a little less we would have had people come in and watch us…but not for $75 for the 3 of them! The spectators had access to the area closest the start and finish lines.  They could see some of the bigger obstacles.

There were porta-potties along the course and a bunch in the festival area. There were several (maybe 5-7 ) water stops along the course where they also had salt and some beans, gummies, gum, etc.  We did get to a couple of water stations that had run out of water.  They were also threatening that if you took more than one cup you had to do 30 burpees…though they did offer refills (when supplies allotted).

* Race Details
Before even stating the race we had decided that we were going to take our time and try to enjoy the experience as much as possible.  We had been chugging water like it was going out of style for a few days prior, filled up our hydration packs, threw in some electrolyte tablets and packed numerous bars, beans, etc.
We lined up in the corral (they did check the time on our wristbands, but as mentioned before we name dropped and were able to get in a but earlier).  There was a MC walking around, greeting people and getting us all pumped to go.  “We are Spartan!” The classic smoke and bull horn and off we went. It started out with some rolling hills, a short way in we hit a muddy trench and continued on with running. There was a lot of running (jogging, hiking or walking) between obstacles.  We came to a bottleneck–a steep, narrow path straight up the mountain.  For this, we obviously had to go with the flow.  Once at the top, we essentially went right back down just as steep of a path…of very fine sand and rocks.  It was pretty slippery and was easy to lose footing.
There was another very steep  and very long (about a mile or more) incline to the top of the mountain– this was the only time that either of us felt pretty crappy, and that was mostly cause I couldn’t breath.  We took a quick break near the top to enjoy the view and take some pictures and then continued on.
They had all their typical obstacles (in no particular order): hurcules hoist, pancake carry, bucket (full of rocks) carry, tire pull/drag, spear throw, traverse wall, Hobie Hop, cargo nets, mud trenches, over under through walls, 6′ 7′ and 8′ walls, rope climb (x2), monkey bars, slippery wall, fire jump and of course the barbed wire “crawl.”  The crawl was super long and down hill.  The mud was filled with gravel, which made it nearly impossible to crawl.  I ended up rolling for about half of it and then did a crab walk of sorts and ducked under the wire when needed.  It was long, and pretty awful…but knowing that we had 12 miles behind us and just 2 obstacles ahead of us we got it done!
Success! Crossing that finish line was awesome! I questioned why I ever doubted myself, got my medal and congratulated Jim on earning his first trifecta!  I failed at the 2 rope climbs and monkey bars, but completed everything else. Jim didn’t get any penalty burpees. We felt great!
We estimated that it took us 4.5 hours, but later found out it was 4:19. We did it! Yahoo!
I think that being really well hydrated helped a ton, also eating a bar before we got hungry and sipping the electrolyte water throughout was definitely beneficial.
Word is that next year this particular race will be a Super instead of a Beast. I think it is a great location and if I am able to I would for sure go back next year.