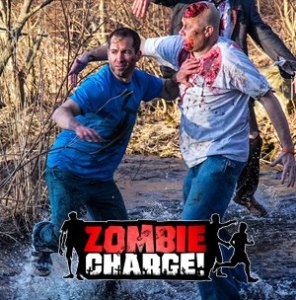 * Event Details
Zombie Charge took place on October 4, 2014 at Spooky World in Litchfield, NH. Parking was $10 which, had I been more frugal, could have been avoided by parking on a nearby street and walking to the venue. Although the parking lot looked small, there seemed to be enough to accommodate the number of registrants. Registration was pretty straightforward. This was an untimed race, so you got a bib number, a wrist band with your wave time on it (needed for free t-shirt after race), and a Zombie Charge buff for distinguishing racers dressed like zombies from the actual zombies strewn throughout the course.

There were two port-a-potties outside the actual race venue and 4-5 more in the race venue itself. The event seemed relatively small so this seemed to be enough. I didn’t notice any lines at any rate. There was no bag drop tent, which I initially was annoyed by, but seeing as the parking lot was close by it wasn’t that much of an inconvenience and it saved an extra $5 charge. There was also no changing tent, but it turned out, I never got dirty or wet enough to need a change of clothes anyway.

There weren’t too many vendors there. There was a ZC5 energy drink tent where you could get a free ZC5 that looked like a vial of blood if you liked Zombie Charge on social media. I declined. The Zombie Charge event itself had a booth where it was selling t-shirts (apart from the free shirt you got for racing), stickers, special medals, and other ZC-related stuff. There was a National Guard tent. The weirdest vendor tent was one set up by Ms. Cadaver. They sold horror themed jewelry and other accessories like an iPhone case that looked like stitched up skin or a bracelet that looked like rotting flesh. Pass. Here’s the website if anyone’s interested: http://www.cadavercarnival.com/shop.html

The schwag at the end was a dixie cup of water (literally, a dixie cup), a medal (I had all my flags taken so I’m not sure if there were separate medals for “survivors” and “infected”…mine was just a generic Zombie Charge medal…but I think there were), and a free Zombie Charge t-shirt. There were no food and drink vendors at all. No free beer! That was truly horrifying!

* Race Details
This was my second zombie run and my first Zombie Charge. The other zombie run I did was the now defunct Run For Your Lives back in 2012.

The race started off decent enough with the announcer briefly explaining the event then shooting a Michael Jackson zombie and yelling “Go! Go! Go!” to start the race. We immediately had to scramble over a pile of decaying wood. That turned out to be the only real man-made obstacle in the race. Obviously, in a zombie run, the main obstacle is the zombies which pop out of hiding places or block your path and try to take your flags, but RFYL had other man-made obstacles such as mud crawls, cargo nets, etc. There was none of that at ZC which I found a little disappointing. They did make good use of terrain and natural obstacles such as fallen trees, sandy shorelines, and stream crossings though.

I managed to make it about halfway through the course before my first flag was taken. This consisted of some wooded trails with minor ascents and descents and a sandy shoreline with zombies strewn throughout. The sand made it really difficult to juke out the zombies and many runners opted to just run in the water to avoid them. I made it through this part and up a slippery, sandy slope to get to the next area – the edge of a farmland or field. At this point, I was among the leading runners.

This area is where was my first flag was taken. There were a lot of zombies here hiding in the weeds and popping out or just numbers of them blocking your path. Without a crowd of runners to use for running interference, it was difficult to get by without losing at least one flag. This part of the course wound up and back and around through the field, and you really had to conserve your energy by walking or jogging while keeping an eye out for zombies hiding in the weeds or the edge of the field and sprinting by them. Some were aggressive and chased you down so you had to look behind you after passing them to make sure they weren’t still coming after you. One zombie chased me for about the length of a football field before giving up!

There were taped off barriers which separated the lanes up from the lanes back when running through this field. What I wasn’t aware of was that the zombies were allowed to cross these barriers and come after you, which is exactly what happened when a little kid zombie snuck under the tape and snatched my second flag when I wasn’t paying attention. Only one flag left now.

The second half of the course consisted of more trails through the woods with several stream crossings and leaping over and under fallen trees until you got to the haunted house portion of Spooky World. This part was really fun! You were essentially going through all the props and sets of Spooky World. Mostly in the dark. With tight corners. You really had to go slow and pay attention because you couldn’t tell if a zombie was lurking right around the corner. Sometimes it was so dark you couldn’t even see your hand in front of your face! I was running with another guy at this point and we ended up taking a wrong turn and had to go through this whole section again. Not sure if it was poorly marked or if we were just so into it that we lost our bearings. probably a little of both.

Finally we exited the haunted house portion and made our way to the final leg of the course which consisted of more up and back taped off sections and some mazes made of junked cars, old tires, and piles of clothing and rags. The up and back section, less than 1/2 mile from the finish, is where I lost my final flag. I managed to juke out the zombies that blocked my path and just barely squeaked by a zombie nurse, getting some cheers from the onlookers. On the way back, the zombie nurse had slipped under the tape into my lane again and she was out for vengeance. She was NOT going to let me get by again! And she didn’t. Last flag gone. From there, I just jogged it in and crossed the finish line, passing a few more zombies in the maze portion just before the finish line.

All in all, the race was fun, but not that challenging. The props and maze portion were really cool and the use of natural terrain was well done, but the lack of any man-made obstacles was kind of a let down. There weren’t as many zombies as I remember seeing in RFYL, but the ones that were there took it fairly seriously and were definitely out to get your flags. They could have used some food and drink at the end too. I would have stayed longer if I had a beer and something to eat after the race. Instead I just bailed once I got my medal and free t-shirt.