I really can’t look into the future, and I have no insider knowledge for whatever counts as Superhero Scramble HQ these days. This isn’t a judgement of character or life style choice.

This is simply about a race that has been to New England twice now – put on some fun times for us – and is still accepting New England cash to come back in 2015.

My recommendation has to be that you should not register.

As many of you know, they recently had venue issues with the tri-state event. Lots of issues. Two (at least) venue relocations, and ultimately a full cancellation. Refunds WERE offered, and if you got one, I’d love to hear from you, because I didn’t.

However, the New England event we saw in 2014 was fantastic. It didn’t show a company in trouble. They pulled out everything they had and the course was both challenging, well built and well marshaled for safety. The festival was jumping – although much of that may have been to the Sports Park staff and crew, as we’ve seen in previous races.

At the time, I remember having to explain to people – especially new runners – that despite the gloss and shine of the New England event, it wasn’t always that way. In other regions, events were being relocated, rescheduled and “postponed” (which is OCR Race speak for “canceled, but you aren’t getting your money back” – at least in my personal opinion).

In fact, a common turn of phrase was that Superhero Scramble was a Florida race, with a New England event. They seemed to do well in their home state, but struggle everywhere else outside New England, where we saw their best side, and brought good turn out.

Thats changed. Recently they postponed their Central Florida event, scheduled for next January – due to low numbers. Even more recently, the North Florida in November 2014 event was “postponed” for the same reason. “Compensation” will come – but I wouldn’t hold my breath.

This means Superhero Scramble, the well polished event that used to bring out the elites, pay out prize money (eventually) and showed us a great time just a few months ago has now postponed ALL events scheduled for their home state, have nothing on the calendar for 2014, and are postponing events as far ahead as January 2015 for low attendance – but still have registration open for New England 2015 next June.

Again, my personal recommendation is to not register. 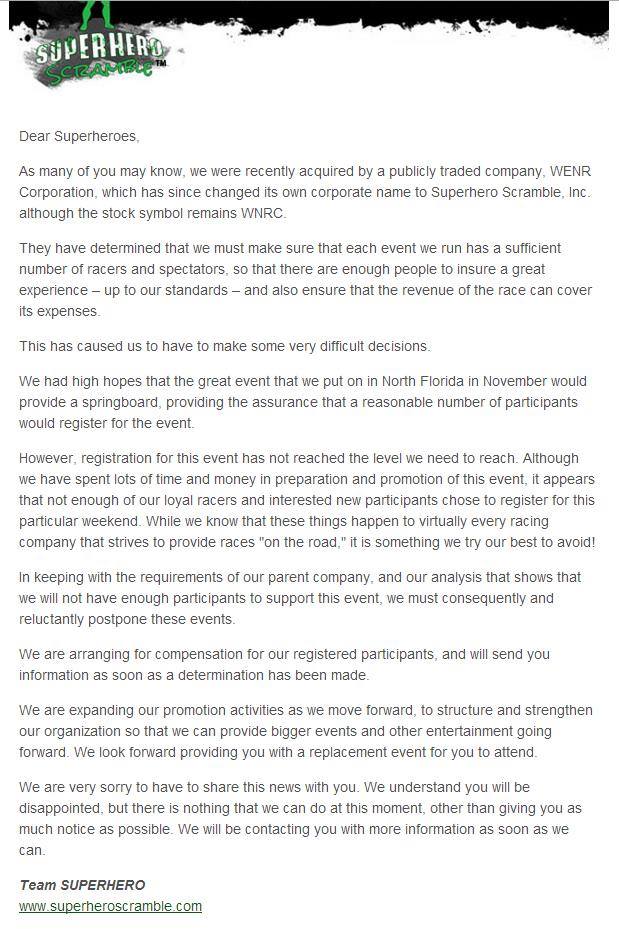 7 thoughts on “Superhero Scramble – the future”