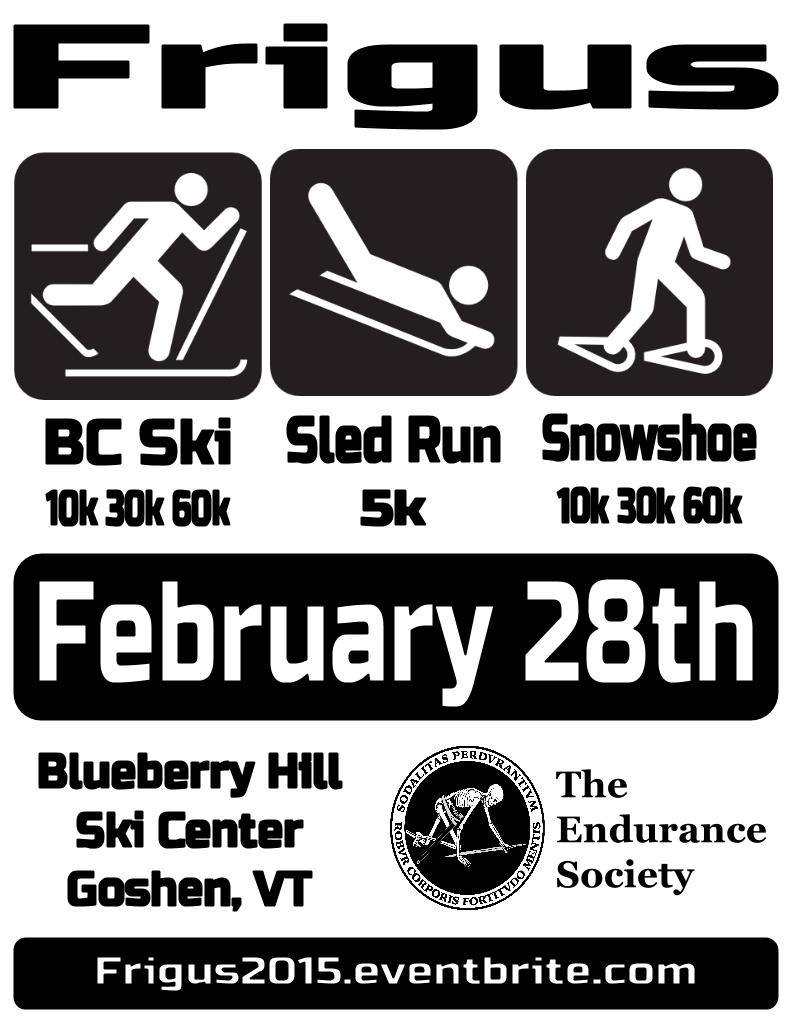 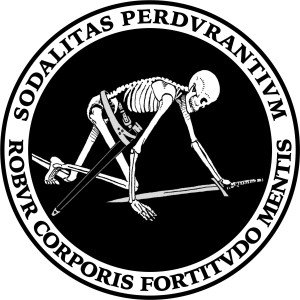 For the second time in my life, I let Andy Weinberg talk me into doing a race that I was convinced was beyond my capabilities.

Taking place at Blueberry Hill Inn in Brandon, Vermont, with packet picket offered Friday evening in addition to Saturday morning.  While a room could be booked at the Inn, it was rather pricey.  They also offered space in the upper loft of the ski lodge where we could drop a sleeping pad and sleeping bag.  We had access to bathrooms and running water and a place to sleep that couldn’t be closer if we tried to the start for $12.  Arriving early meant that time could be spent with other racers and the race directors.  I couldn’t imagine starting the race any other way. 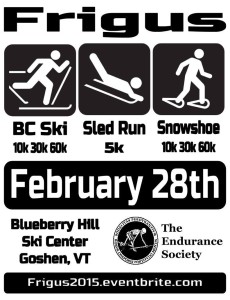 With packet pickup, we were provided with our bib, a t-shirt (reminded me of our NE Spahtens shirts in the male cut) that were unisex size but super soft.  We signed waivers, confirmed our distance and were given the option to change it, and were reminded of our start times.  They had the finishers medals on display, as well as the winners certificates, and the winners Endurance Society etched maple syrup bottles.

A great evening of visiting with friends, a decent nights sleep, and it was morning and the air was buzzing with the energy for the day.  The morning was spent visiting, hugging, feeling nervous about the race!  The temperatures were in the single digits when we started with the highs promised to be in the low twenties.

All the skiers were to start at 7:15, all the snowshoers were to start at 8:15, and the 5k sledders at 9:15.  Andy called out that all heats would be starting on time.  10 minute and 5 minute warnings were given, that a brief meeting was to be held before each heat started and they wouldn’t be waiting if you weren’t there. 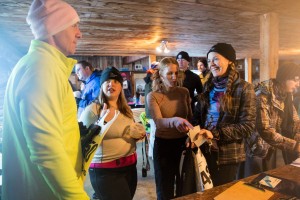 Andy instructed everyone to get behind the start line for the skiers, a combination of 10k, 30k, 60k, and combined racers.  They were given there briefing and off they went.  An hour later, the snowshoers were given the same.  We had 2 miles of gradual up, 2 miles of steep up.  We would have one aid station at approximately the halfway point.

And we were off.

Neely Fortune, Mathieu Lo, and I decided to stay together, walk the course, have fun, push ourselves to finish.

The first section of the course was for all 3 distances.  At some point the 10k would turn off and we would continue on.  It was incredibly inspiring to watch Mark Webb crutch his way up the hill, taking on the 10k.  I was able to have a glass of wine with Amy Parulis and her father as they were doing a party lap 10k to celebrate his birthday.  I tackled Mathieu, my way of passing along Ilene’s hello.  Got a hug from the fantastic Richard Ricciardi. 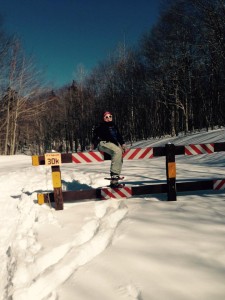 The course was beautiful.  Mountains, streams, lakes, snow.  We went uphill, downhill, flats, up and down.  We passed my next home, crossed some bridges, saw some skiers out for a jaunt, snowmobilers, and we were at the aid station.  Greg Tappin was there with a smile and my chocolate milk and gluten free pretzels for me!  While we were there, we were lapped by a 60k skier.  He was flying!

We were told we were approximately halfway.  On we went.  We would get passed by more 60k snowshoers, Drew lapped us on his way to a 2nd place finish, listened to music, and start to feel our bodies breaking down.  Hip flexors, knees, chafing.

It wasn’t long before the finish line was in sight.  My own personal cheering section was waiting for me.  I hurt.  I wanted to cry. I did it!  I hugged Lisa Klinkenberg, looked at the ground, and laid down.  I was exhausted.  I was given my medal and mustered the energy to stand up and get inside where there was chili and warmth. 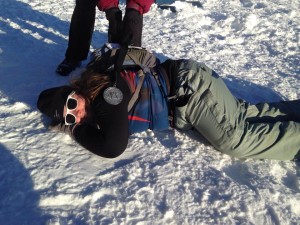 There was a fire outside to enjoy and racers still on course.  We enjoyed the fire, the sunset, and cheered racers as they came through.  Since the course didn’t close until midnight, there was a bit of time left to wait.  Having been in the back of the pack too many times to count, whenever possible, I like to be there to greet finishers.

We took a trip up to the aid station in hopes of catching friends and cheering them on.  We missed Amanda and Billy, helped out Ryan with encouragement to keep going since if he finished he would be the 2nd place finisher for the combined, cheered on Shannon and Doug, visited with Jane and Ted, and heard from Eric that he hadn’t passed Liza and Jordan.  Worried that they were headed back to base, we headed back ourselves.

The fire needed stoking, racers were finishing, and eventually we got word that Liza and Jordan were still on course and would be finishing close to midnight.  It was an amazing atmosphere.

Overall, The Endurance Society nailed it.  There seemed to be no issues at registration, they didn’t run out of medals, race directors were visible and available.  No one got lost, the event started on time, everything that was promised was delivered.

I cannot wait for Infinitus!