Big thanks to NES Ambassador Dennis for this review! 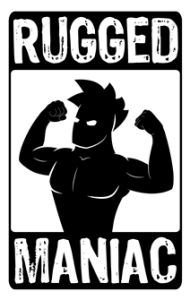 It’s no secret that Rugged Maniac is my favorite race series. It has been around awhile for good reason, it’s FUN. I should say right here at the beginning that I skipped a few obstacles due to an injury, but was still able to do many.
The venue for the event is a motocross track in Southwick, Ma. There is plenty of parking, so no bus rides. Parking is $10.00 per car. I did hear about a couple of incidents where the volunteers parked cars in such a way that people were blocked, this really should not happen and I’m sure will be addressed at future events. There is NO FEE for spectators and the layout of the course allows for many great spots for your friends and family to watch. 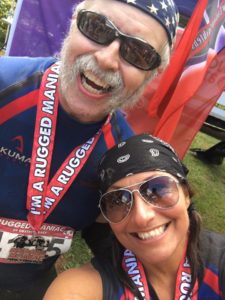 Registration is pretty straightforward, go to any table and you are assigned a bib number. There was a an backup on Saturday but the staff put all hands on deck and cleared the backlog in plenty of time for people to enjoy the rest of the day. Rugged Maniac does charge extra if you want to be timed, if you were one of those you were directed to another table to pick up your timing chip. Honestly, if you do want to be timed, be certain to sign up for the first or second wave. There are sometimes backups at a few obstacles as the day progresses. Most of us what have done more than 1 or 2 of these events don’t even bother with the timing chip. Remember what I said about it being FUN. 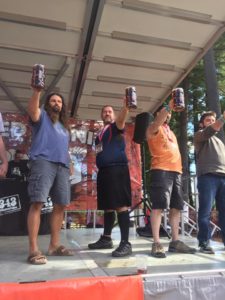 The festival itself, well let’s just say that Rugged Maniac knows how to throw a party. The other thing is that after you do the course, you are not so beat up so you can have FUN at the party. The vendors were either pertinent to the event and were providing enough samples to make it worthwhile or were charities worth supporting. The Marines were there with their pullup challenge once again, and as an old Army vet I was compelled to talk smack. Lucky for them I was nursing an injury. Harpoon Beer was there again this year and this year had a cider offering for those people who prefer that option. There is a bouncy house for the kids that was busy all day long with happy faces. Pie eating and beer-stein holding contests. Food court included some pretty good food, served hot and fresh by the VFW. The “showers”, (cold) were available as well as a changing area.

Now let’s talk about the course itself, I’m including the course map so I’m not going to list them all but just say they are well built and some are fun and some are challenging enough to make you feel like you have accomplished something. The only backup I saw this year was the Warped Wall and that was maybe 5 minutes. There was one obstacle that more than one person felt was placed wrong. The Ninja wall were so close to a water obstacle that they were very slippery with mud. I saw more than one person wipe out.

This year’s finisher’s medal was definitely a step up. The T-shirts had both a men’s and women’s cut. Race pictures were a little disappointing this year. There didn’t seem to be as many photographer’s on the course as in previous years.
Overall, this is an event to be on your calendar. I have already signed up. 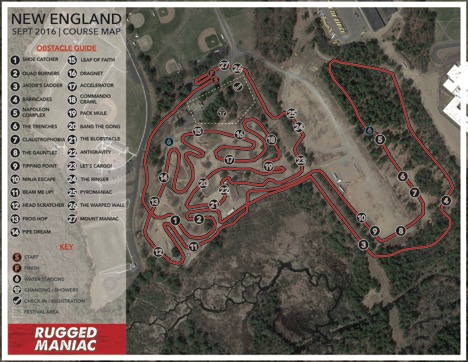 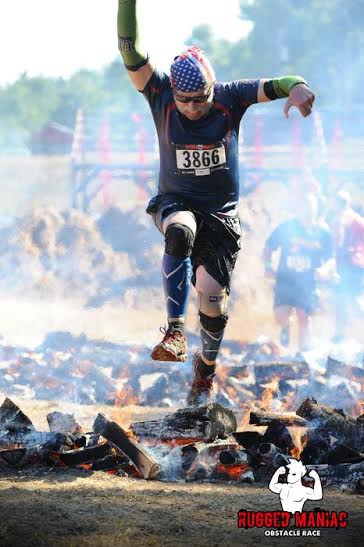 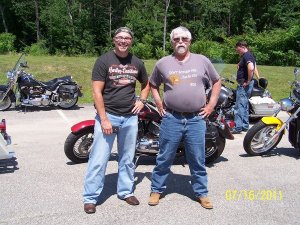 I was asked to write up my OCR story. But, I’m not sure how to start, unless I also give a little background history.

I’ve never really been an athlete. Sure, back shortly after dinosaurs roamed the earth when I was a kid I played sports, but I certainly wasn’t a top performer. While spending a few years in the Army, I really had fun doing the Army’s version of a playground on a regular basis; ropes, monkey bars, climbing, crawling, and carrying heavy stuff. That was fun stuff and they paid me to do it, and if you will forgive me for bragging just a little, I was pretty good at it.

Now, fast forward 30+ years and about 110 pounds and 10 pant sizes later to October 2011. My exercise routine was walking from the recliner to the refrigerator and back. I was approaching a benchmark birthday, 55, double nickels, cue up Sammy Hagar if you like, and I knew I needed to do something about the shape I was in, but lacked the last bit of motivation to actually do something about it. I was surfing the net one day and discovered this event call Warrior Dash and that was the last bit of motivation I needed. This was the stuff I used to enjoy. I signed up that day. I signed up at a local gym shortly thereafter. I had 9 months to get ready. 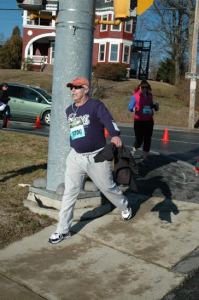 As you might imagine the first week at the gym was not pretty. That first day on the elliptical after just 8 minutes I was soaked in sweat. My body just did not respond the same as it had 30+ years before. I ached in places that I did not know could ache. I was going to the gym 4-5 days a week and sweating. I don’t perspire I sweat, and I had not discovered tech shirts, I was still wearing cotton. I started to eat just a little smarter, but I can’t say I radically changed my eating habits. Weight started to come off and with a little research I found that there were other races similar to Warrior Dash and there was this one that was 3 months sooner.

So I signed up for Renegade Playground Challenge. I now had maybe 5 months to get ready. About this same time I heard about a local 5k that was happening on Jan 1st. Lowell 1st Run. I figured a new year, why not. So I signed up. By this time I could do maybe 25 minutes on the elliptical. Let’s jump back 30+ years, at one point I was able to run 5 miles in about 35 minutes or so. My goal for this 5k was under 45 mins and I knew that would be a challenge. Got on the treadmill at a slow pace and did a 5k in about an hour. I had about 6 weeks to go. I was still well above 200lbs at this time, but progress was being made. Kept going to the gym and sweating. January 1st arrived and honestly had no idea of what to expect. Well I met my goal. 42:29.68 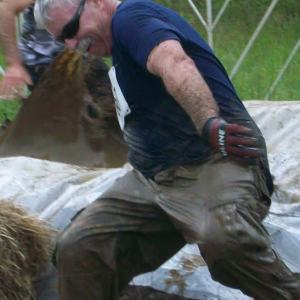 Next up, I volunteered at Tough Mudder at Mount Snow, just to get a sense of what an obstacle course race was and the people doing it.  I got lucky that day, I was assigned to the finish line, and while I was a bit intimidated by how many “hard bodies” I saw, I did see a few of the “softer” bodies that were more in line with what I looked like, and they survived and were smiling at the finish line. I was still a little north of the 200 lb mark at this point, but definite changes were taking place, such as needing new clothes, the belt just was not cutting it.

Back to the gym I went. Now it was time for me to get serious, I was going to be doing an obstacle course at a freakin’ mountain in another month. Back to the gym and sweating. That month passed all too quickly. Well, by this time I had seen some of the Tough Mudder, watched a few videos on YouTube, and have to say that it was with more than just a little trepidation headed for Stratton Mountain.

My wife and I went up the night before, to get a good night’s rest, (yeah right). Any thoughts of a good night’s rest went out the window as we turned the corner approaching Stratton and there it was. I had skied Stratton many years previously, but knowing I was going to be climbing UP and DOWN while doing the various obstacles certainly changed my perspective. In case you don’t know, Stratton is a big ass hill. We settled into our room, took a walk, discovered where the start/finish area was, it was at the bottom of the big ass hill. Walked over to the resort area, had dinner, actually met a few people who were going to be doing this same event the next day, as well as the folks putting on the event. This helped put me a bit more at ease, that and several adult beverages. Back to our room my wife and I had a very restful night. 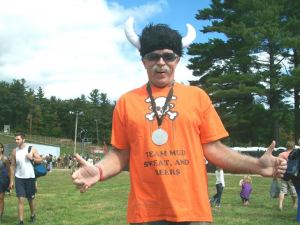 The morning finally comes, the sun came up, and it was a nice day. We made our way to the festival area, I got thru registration, signed my waiver, hung out for a bit, and then it was TIME. I made my way to start line, where one of the people I had met the evening before was the announcer, I don’t remember any of what he said, I was focused on that big ass hill right in front of me. Every wave was sent off to a different song and I do remember what was playing as I started up that big ass hill; For Those About to Rock (We Salute You), by AC/DC. I remember going thru hanging tires and doing the monkey bars and then my only memory is thinking to myself; “Why am I doing this and when will we ever start going back down?” We started back down and lo and behold, a Slip’N’Slide, way cool. I love Slip’N’Slides or any obstacle where gravity does all the work. But then we started back UP AGAIN. I later found out this was only about halfway through the course. I vaguely remember going through a spider’s web of ropes that was placed in a very muddy area, but otherwise I can only remember thinking to myself; “I’m never doing this again and when will we ever start going back down?” Well, we did finally go down and the finish line was in sight, ran through the bus, jumped into the mud pit and crossed the finish line. My goal going in, based on results from other people in previous years was less than 1 hour. 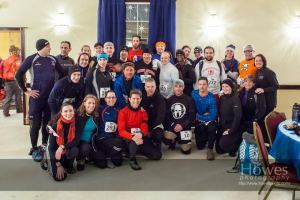 In less time than it took to write this sentence, I wanted to do another one, luckily I was all signed up for Warrior Dash at Gunstock Mountain, another big ass hill. I survived and wanted to do more, well a few months later I happened to discover a group of like-minded individuals, the NE Spahtens and did my first event as part of this team at Blizzard Blast 2013. 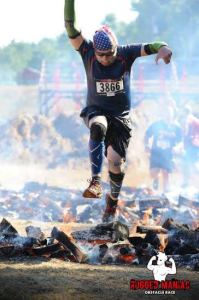 I’ve done around 25 more events since. I don’t like to call them races, I prefer event. I’m never going to be the fastest, but my goal is that one day I will be oldest doing at least that particular event. I’ve come close twice. Weight is still an ongoing issue for me, although I am under the 200lb mark.  It’s a battle. 30+ years on the couch and weighing close to 270lbs at max was the major contributing factor of having degenerative joint disease bilaterally in both hips and knees.  I like to say that I can still do everything now that I did at 25, I’m just not so quick and my recovery time is longer.  I got a few years left with my original parts, such as they are, and plan on doing these crazy races as long as I can.