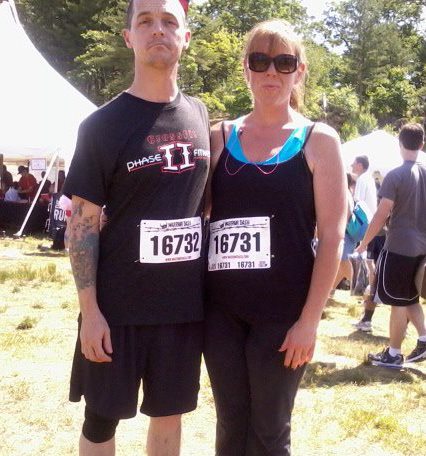 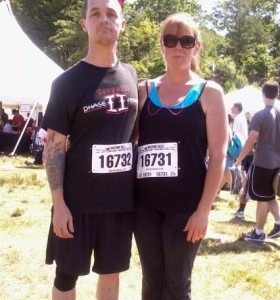 By day. I simply am a cable guy. Not the Jim Carey, obsessive compulsive cable guy, but someone who takes my job probably too serious at times. I am a technician, so carrying around an 85lb ladder and climbing it to it’s 28′ top is nothing out of the ordinary. Climbing under houses, in 18″ crawlspaces, is also nothing out of the ordinary. Like anything, they are just minor obstacles in my every day work life, and they are overcome with ease.

My first OCR was the Warrior Dash in CT, during the summer of 2012. Having never done one, it seemed a lot more daunting than it really was, as a matter of fact, it turned out to be much easier than anticipated. Seeing some of the obstacles, I think I just psyched myself out.

When the race started my heart was pounding and I couldn’t seem to move fast enough. Not because of any struggle on my end, it was just such a congested beginning it was hard getting past everyone to get into a good pace. I finished with a time that made me happy, and set the bar for future races.

My biggest accomplishment was getting the first one done. I had trained and trained for it, nearly psyching myself out to the point I didn’t want to do it. My racing “career” started rather late in life, so even attempting it was an accomplishment. As far as an individual obstacle goes, I think the rope/ wall climb might have been the biggest issue for me. Yes, I climb a ladder everyday at work, but climbing the wall with no safety harness took some digging deep.

At this point, the challenge is the biggest. But I also love the camraderie. Rarely do you see two people arguing or wrestling around on the ground like meat heads fighting. The events are joyous, the people are considerate and overall it’s just friggin’ awesome!

I have run through the P90X program, I run as often as possible. I hit the gym whenever possible, and also CrossFit (not as often as I would like but I do enjoy the ass whoopin’ a good WOD gives you).

Diet wise it’s nothing special. I try to stay away from processed foods and try to cook as often as I can. Eating out is a rare treat. I appreciate knowing where my food comes from, and will seek out a farmer’s market for that reason. We all have our weaknesses *cough* like ice cream *cough* but it’s enjoying things in moderation that is key.

Hell no! In school, as a kid, I did the typical things like baseball, soccer, etc, but beyond that, nothing. During high school my gym teacher, who I now look back as one of my biggest inspirations, tried to get me to go out for the cross country team often. I was so into smoking and being a bum that I never even tried, eve though I could run and keep up with the best of em.
After high school I became complacent, worked a remedial job, had children and never really cared what I was eating or about exercise. I mean, I would throw around a baseball in the backyard with my sons or toss the football around with my brothers and family, but beyond that I did nothing. It took a toll on me. After not having a check up for a few years I got one and was told I had the cholesterol of an obese guy, although I was barely 140lbs soaking wet. I used that as a catalyst to get in shape, eat better and it is when I stumbled on the wonders of OCR and running.

My father, Steve. At this point I don’t think he could do one, having had two rotator cuff surgeries and recuperating from multiple bouts with cancer. He was a marine during Vietnam, but that is not who he is. Who he is, is a man that always, ALWAYS put family first. He literally busted his hump for my mom and us kids, it would just be great to share such an awesome experience with a man I hold so much admiration for.

Hmm fun fact… I can lick the tip of my nose with my tongue. Is that ok? hahaha!

To keep training as if every day were a race. I have a goal of lowering my overall BMI, hopefully seeing some muscles I’m not used to seeing. To continue racing OCR’s as well as 5k’s, 10k’s and I would love to attempt my first half-marathon this year. My few races are the Georgia Spartan Race and Hero Rush in Nashville, TN. My wife and two sons are also running both. Can’t wait!!