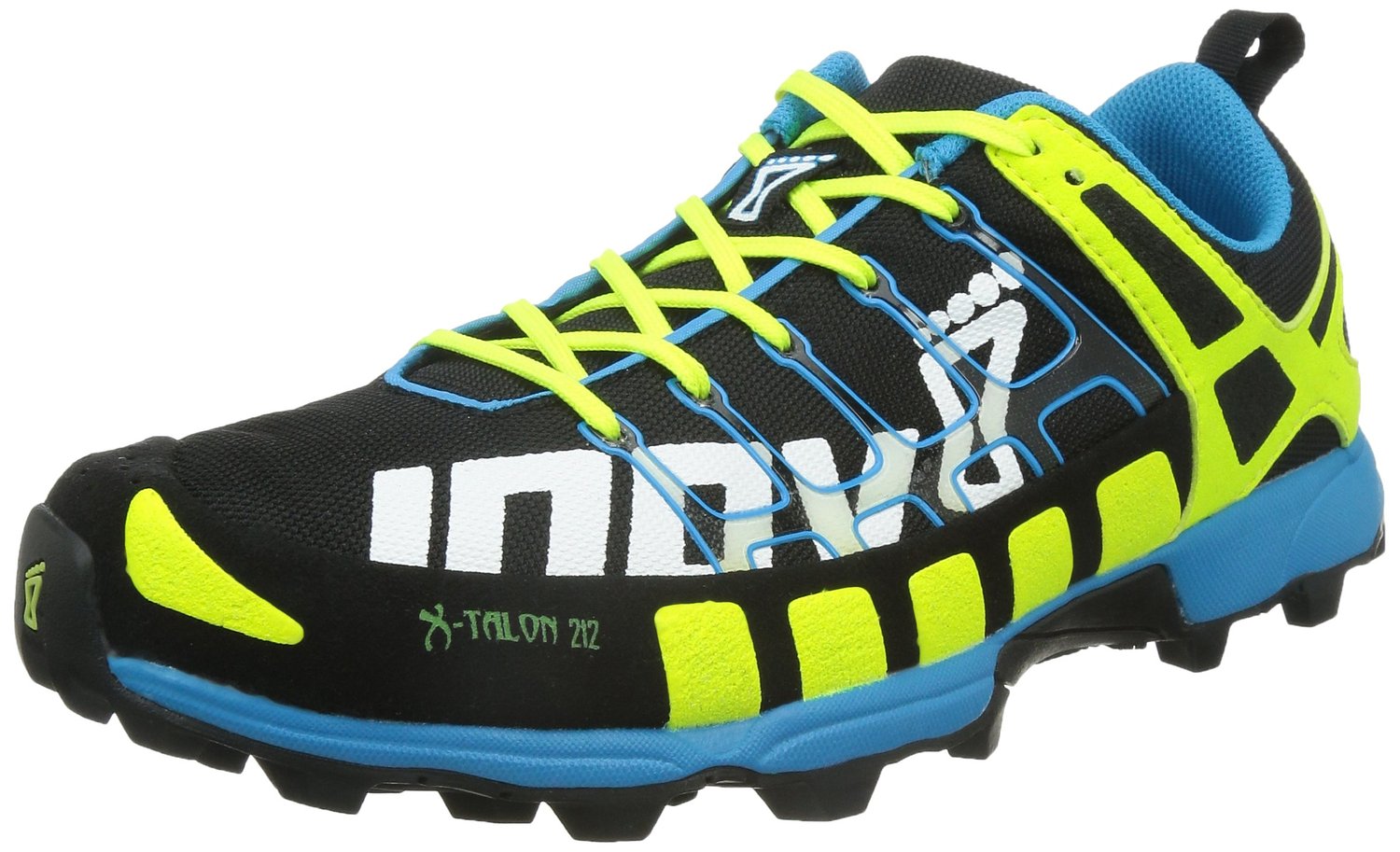 The Innov-8 X-Talon 212 is very comfortable, but a little tight in the toe box going down hill even with the standard fit. There is a precision fit available that is even narrower. As soon as you set eyes on them you can tell they are a high quality, durable shoe with a lot of grip. The lugs are 8mm and seeing them instilled a lot of confidence about going down steep, wet hills.

That confidence was well placed. I’ve logged 21 very technical, wet, steep miles over the course of 2 races in last few weeks. I felt in total control running down some steeper declines that were either wet or just narrow and curvy or both. The 7 Sisters Trail Race and Bone Frog New England both posed formidable challenges and the shoes have come out looking almost new after a hose down.

They are very light, except after full submersion. Without drain holes, water is trapped in the shoes and does not “squish” out while running after. Instead it feels like lugging small wet towels around your feet for a longer amount of time than is comfortable. The benefit of no drainage is that they don’t stuck in lots of small pebbles during submersion like the Reebok’s tend to do. With both brand of shoe you feel uncomfortable either from water or from pebbles in the shoes and only the pebbles in the Reebok’s compelled me to stop and shake out the shoes.

Overall, I highly recommend the Innov-8 X-Talon 212. They are tough, mostly comfortable, and built for speed on the trail. If the drainage issue could be solved they’d be a perfect shoe. If possible try a pair on before buying to see if they are tight around the forefoot. 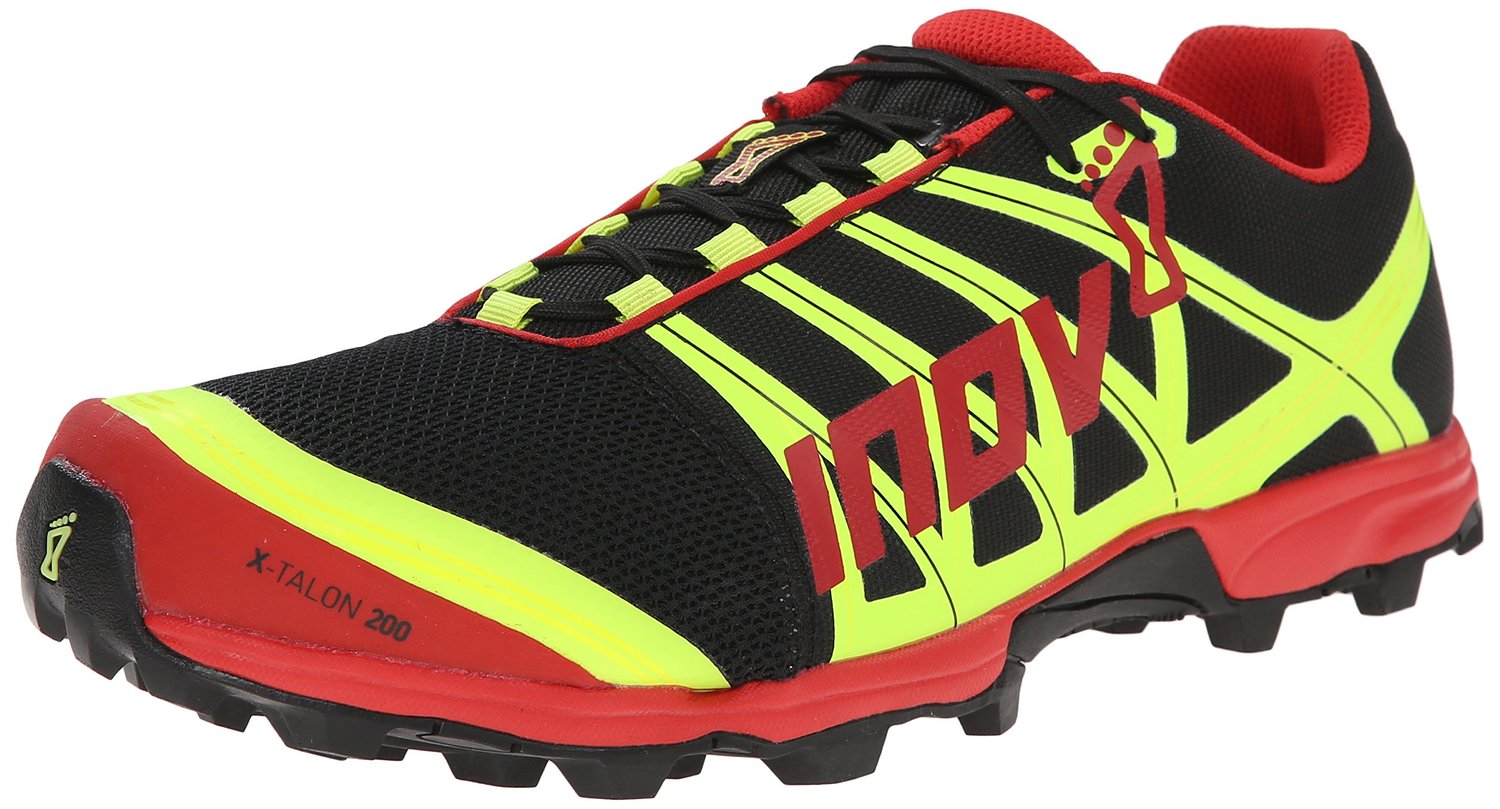 Review: Last year Inov-8 unleashed it’s first shoe truly built from the ground up to tackle everything OCR’s throw at them. The X-Talon 200’s are the 200g/7oz cousin to the X-Talon 212. They come with a roomy toe box for your toes to spread out a bit, the ability to drain just a few steps after leaving whatever water hazard you just happened into and lugs to keep to connected to the ground no matter how loose and messy it gets. The 200 has a 3mm drop which I find very comfy, not too much and not too little, it seems Inov-8’s goal was to make sure Goldilocks chose these shoes over all else. At 6’1″ and 250lbs comfort and support are a huge deal for me and these shoes deliver.

So those are all great stats and numbers but how do they survive on the course? Well last year I took them for a spin. I was just coming out of Reebok Spartan Super’s and I was a bit worried. Those shoes were way too narrow and offered no support to me so my fear was rolling my ankles several times while having my toes smooshed together over again. What I got was a shoe that locked my heel in place while allowing my toes to move to such a degree no amount of mud has been able to rip them off, just the right amount of cushion even over jagged rocks, and drainage that made it so it didn’t feel as though I was wearing cinder blocks after the first bit of water ( I’m looking at you older pair of trail runner Adidas!)

Now here’s the bad, the shoes got me though about 5 races of varying degree (Spartan Sprint, Super, Beast, Battlefrog, Zombie Charge) then when I went for back to back Spartan Super’s in Barre they decided to start ripping where the toe cap met the fabric of the toe box. I emailed Inov-8 whom responded with wonderful customer service. They asked for a picture then promptly replaced my X-Talon’s. I finished out my season with my new shoes which included a trip to Killington and a few other races then packed my shoes away for the season. Fast forward to this year I ran both Spartan Beasts in NJ. Day 1: my shoes began to rip in the exact same spot. Day 2: I could clearly see my toes because the rips were so big. I noticed at this point I was not the only one with X-talon 200’s that had this issue, many on the mountain had the same shoes with the same rips.

I emailed Inov-8 once more and pointed out what I believed to be a design flaw, I did not ask for replacements but I did want to point out the issue. Once more Inov-8 was very prompt and friendly with responding. Even though I admitted to having the shoes for over a year and my current ones were what was called a,’One time courtesy replacement’, they again apologized and sent me a new pair.

It turns out Inov-8 did acknowledge this as a design flaw and corrected it by swapping the fabric on the toe box with ballistic nylon, a difference you can definitely see and feel.

My new shoes have only started their journey and durability tests but I’m confident I will see much better results here. I ranked these high mainly because they truly are the most comfortable pair of OCR shoes I have ever strapped on and even though I have destroyed two pairs I have only paid for one and thanks to the great customer service at Inov-8 I have never missed a race due to my shoes failing. Now if only they could work on a color pallet that doesn’t look like McDonalds threw up on a shoe.

Sidenote: If you are sporting some of those ripped X-Talon 200’s, email their customer support, be polite and explain the damage. You will get a new pair of the new version.

Do you own these shoes? Leave a review below!