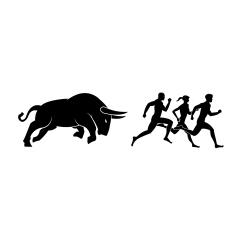 The minds behind Rugged Maniac (http://www.ruggedmaniac.com/) announced a new event series – and it’s causing quite the stir.

The Great Bull Run (http://www.thegreatbullrun.com/) is modeled after the famous run in Pamplona, Spain – the one where thousands of people line the streets, and angry, aggressive bulls stampede and run through them – participants have to run, climb, hide or otherwise avoid being gored and stamped to the dirt.

The bulls are then put into a bull fight to their death, and participants throw tomatoes at each other.

The Great Bull Run wants to emulate this, but with a decidedly “American” flavor.

As you can imagine (and as is the original series) this has already proven controversial. On my little slice of Facebook alone, I’ve seen people sign up for this, and I’ve seen people pull out of all Rugged Maniac events entirely. Quite the polarizing reaction to something I’m sure Rugged Maniac thought would be a fun, niche event.

On a personal level, I equate this with the deplorable act of dancing circus animals, and don’t plan on supporting it beyond this simple blog post.

But how does this sit with you? Do you think Rugged Maniac has dropped the ball on this, or will they find an undeveloped niche event, and tap into a new market? Drop us a comment.

10 thoughts on “The Great Bull Run”