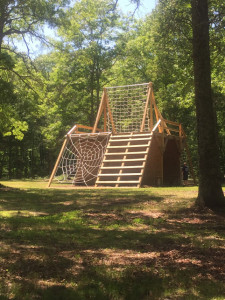 This weekend was chock full of activities. From Infinitus to Spartan Race to a #racelocal event Wason Pond Pounder, you had your choice of what to do. If you weren’t up for a race though, I know that’s near sacrilege around here, there was also an opportunity to check out the Laid Back Forest.

Located in Coventry, RI, deep in the woods of a residential neighborhood, was an adult playground you would not believe unless you were there. I had read the buzz about this place since it opened and had not been able to make it until now. I caught wind that they were holding an open house to kick off the beginning of the warm weather season. They were to open the course up for 3 hours to the public, at no charge, though you did need to get a ticket as they expected to have quite a few people show. My two boys (Alex and Colin) and their friend (James) thought it’d be a fun excursion so we hopped in the truck and made the two hour drive.

As we made our way through rural Coventry we finally saw the sign to turn. We slowly rolled on, trying not disturb the residents, and it came into sight…. We finally made it!!! And it was magnificent, it was epic and we were going to play our hearts out for three hours! 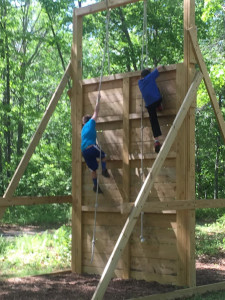 As I said, you did have to pre-register but it was quick and easy. Similar to a race you got a wristband and signed the usual waiver. Quick and super easy. From there it was your choice. There was no structured tour, no workout to follow, just an open field of OCR heaven! There were your typical walls of various sizes, a-frames with ropes to grab on and climb over, cargo nets, etc. You had a really cool spear throwing station, with at least 5 spears on ropes, to practice with. My son Colin and I enjoyed the balance garden which had beams and stumps to balance, jump and climb over. There were monkey bars and even an extremely tall wall similar to the one Robb has at FIT Challenge that you have to climb way up and over.

There were some logs of various heights set up similar to walls that you had to jump and climb yourself over. You had a couple inverted walls, of various heights. They got really innovative on one thing which seems more designed for the kids. They had stacked tons and tons of wooden pallets together and put them all around a small area. The kids could jump up, down over and across. To be honest, I had to get in on it too, it was loads of fun. 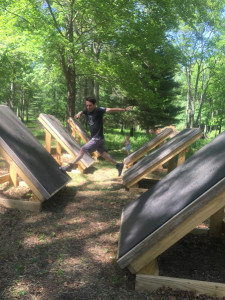 There were also some not so typical obstacles as well that were a lot more ninja warrior oriented. There was an inverted wall, a salmon ladder, a salmon ladder to a wooden plank “monkey bar” jigsaw type of thing. That was extremely intense, I didn’t even attempt that one, it wasn’t happening! There were the 45degree angle jump pads that you usually see at the beginning of a ANW course, unlike the shows usual 4-6 pads there were seven so you really had to keep the momentum going if you planned on conquering this. I really loved the swinging rings, I’ve seen it a ton of times on tv and have always wanted to try it. Yeah, I nailed it!

In the middle of the field though was a gigantic piece of equipment. I’d call is Goliath but that name is taken and honestly, doesn’t come close to the obstacle this thing is. We will just call it the monster, how’s that? It had multiple traverse walls which were extremely difficult. A variety of diameter rope climbs. There were ladder climbs to the top level, including two cargo nets which on was set up like a spiders web. Once up top there was a vertical cargo climb. At its peak it must have been 30-40 feet off the surface of the ground. It was awesome!

I know I’m missing a ton here, but that’s the great thing, you can now go and explore it for yourself! There are already talks of trying to do this a couple more times this summer and I surely am hoping we can put together a Spahten excursion, you will all love this place and not want to leave!

1 thought on “The (not so) Laid Back Forest”