Aaron provided us with a review of the OCR training seminar, held on August 18th, 2013 at Unleashed in Warwick RI 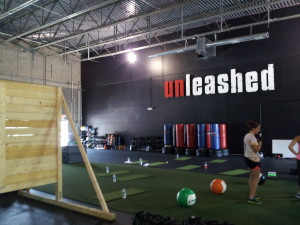 This past weekend, NE Spahtens Corrine Giordani, Sandy & Vince Rhee, and myself headed down to Unleashed Fitness in Warwick, RI to attend the only Obstacle Course training seminar that I’ve ever heard of.  I may be wrong on this being the only OCR training seminar I’ve heard of, but I don’t count a local class at Gold’s or Crossfit as being specific OCR training.  Besides, none of those places have all the fun toys or the trainers that Unleashed offers!

The session was billed as ‘How to prepare for an Obstacle Course Race’ including the 7 most common mistakes made preparing, training techniques to help build strength, boost endurance & flexibility, and unlock muscles hidden potential.  Also planned was to teach strategies for the big 3 obstacles – monkey bars, rope climbs and walls.  All sounds good, and learning new techniques is never a bad thing, whether a seasoned racer or going for your first race.

Upon arriving, we all signed in, received a copy of the power point presentation and met the 2 presenters, Unleashed co-owner and frequent trainer Kevin Roy and Todd Cambio of Precision Fitness.  Both Kevin & Todd are SpartanX certified, so they love OCR and deal with it daily – not something you get from you class at PlanetFitness.  Todd runs many of the short races, while Kevin is an Ultra Beast finisher and has finished the Peak50 as well as other ultra endurance events, so they practice what they teach.

We made introductions around the room, the 16 attendees varying from just signed up for their first race to future DeathRacer Corrine and everything in between, then sat down for the PowePoint presentation from Todd.  A lot of useful information given regarding general training methods, some science background as to why you need to stretch, how you can never work your core enough, and of course, those 7 most common mistakes.  The Powerpoint lasted about an hour, which in my opinion was a bit long, but I’m much more excited to get onto the hands on; however much of the information is useful to someone not as experienced or hasn’t been on a gym/wod program.

Overall Powepoint grade: B/C depending on level of racer

Now onto some actual sweating!  Todd led the group on a series of exercises – everything from butt kicks, laps around the building to skips to crab walks and bear crawls, and then onto a large plank/pushup/core/burpee series.  No one was  dry after Todd was done with us, and my abs can attest today – coughing and sneezing hurt the day after!

Kevin took over after this, letting us cool down a bit and went over gear, clothing, general race nutrition and hydration strategies.  All of us took a little bit from this, and each of us had a few pointers to add for new racers as well.  We all liked hearing Kevin’s idea on gloves – he uses and recommends kayaking/paddling gloves – specifically designed to grip when wet!

Kevin then led us on a workout – a few laps around the building, and into a park down the street, over a few cement walls, some rocks and a great slippery wall substitute – up a metal slide and some burpees before back into the gym.  Kevin and Todd then demo’d multiple obstacles – walls, rope climbs, traverse ropes, monkee bars, and rappel walls.  We broke into groups and went thru each of the stations (ropes, walls, rappel walls, monkey bars) trying each station out – biggest key I got was keeping my shoulders ‘packed’ on the monkey bars, assuming I’m not able to keep the arms bent and 90 degrees for the whole span.  This section, unfortunately was a bit rushed time was running short and too soon it was the end of class.

Workout/playtime – B – simply because it was too short

The Spahtens then took advantage of Kevin’s generosity in staying after, as he had planned a whole circuit course for us all, but ran out of time.  He had 14 or 15 specific stations set up – the 4 of us taking turns on each circuit, the ones not actively on the training staying moving by burpees, squats, jumps, or high knees.  Circuits were tire flips, lay down inverted sled pulls, rope climbs – with knots, without knots, monkey bars, Hercules hoist, wall climb, rappel wall climb, traverse wall, dead man sandbag carry up & down a slope, cargo nets and a few others I’m sure I missed.  Basically, he ran us thru a ton of obstacles without letting us catch our breath, making fatigue a serious issue and the later circuits were that much harder.  If this circuit had been included in the original class, the whole class would have been A+ without a doubt.  That we stayed extra for it – it was almost better as it was just the 4 of us running the obstacles, and from watching people in earlier workouts, many would not have made most of the stations.

So overall day: A-

The information given out was very useful, both for the seasoned OCR participant and even more so for the less experienced racer.  Would I go to another session like this?  Most definitely, knowing just how much fun can be had, and if the circuit training can get worked into the class, it’s a no brainer to participate!