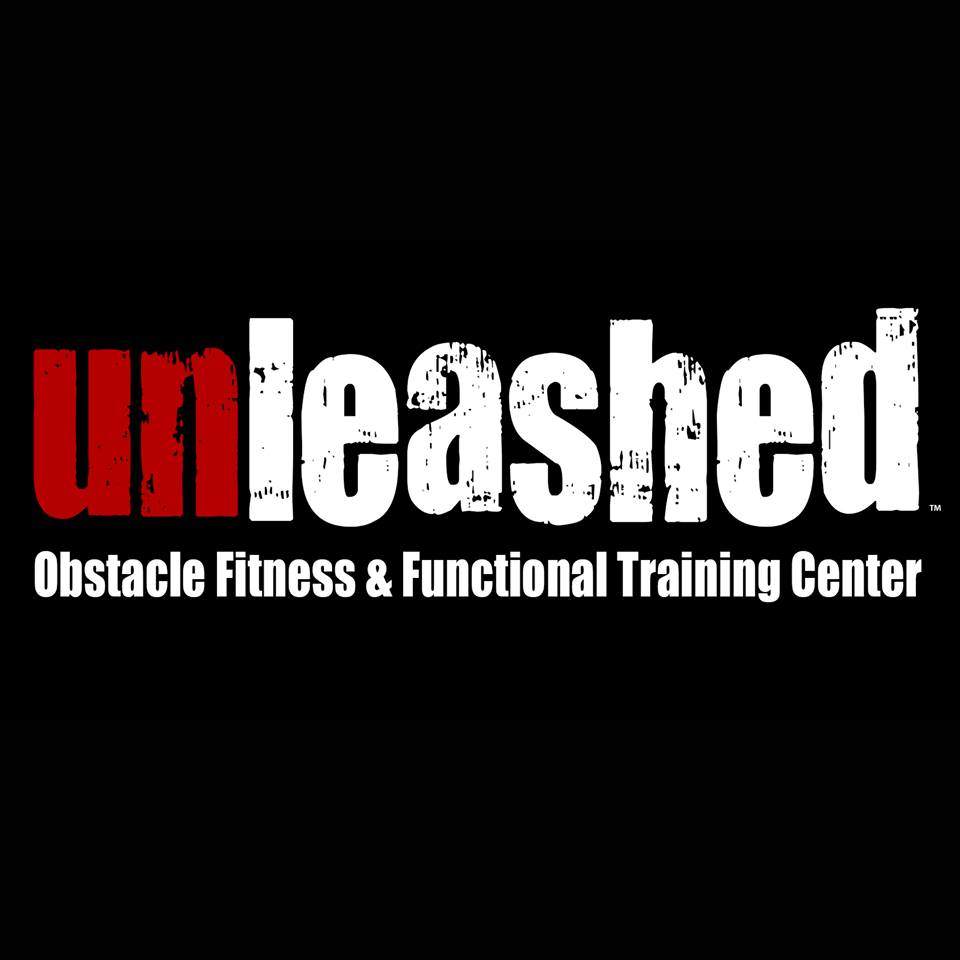 Unleashed Indoor Obstacle Fitness & Functional Training Center recently opened in Warwick, RI, and this Saturday, 7/27 they advertised an open-house with a back-to-back smorgasbord for their classes.  The first class of the day was taught by Kevin Roy, titled “Obstacle Course Fit.”  It promised an hour-long circuit that would include a hard workout and practice on lots of technical elements on their cage and other internal elements, including 6’, 8’, and 10’ walls, ropes of various  lengths and widths (for those who are unsure if this makes a difference, thicker ropes are harder and also help build grip strength).  A heavy duty “cage” type set up with lots of monkey bars, including ones at pretty steep angles, Tyrolean traverse ropes, a Hercules Hoist, low and high rings, and cargo-nets.  The only things that seemed missing on that contraption was a series of swinging rings (a la the Superhero Scramble rings obstacle), although that may be a personal fear-based desire on my part to figure out how the hell to do those things without my grip failing.

I was also interested in getting a taste of Kevin’s coaching style.  He’s one of the first group of folks trained and certified as a “Spartan Group X” trainer.  I don’t actually know much about this particular project by Spartan, but based on my experience with them my presumption was that the folks that went through their program were going to be experienced and serious trainers, and also have some really concrete experience and insight into knowing what helps to make OCR races better, stronger, and more successful.

I gathered from Kevin that this particular Open House class was significantly bigger than most of his OCR classes, at least to-date (there were 17 of us).  He started out with some dynamic stretching and a light jog over to a local playground was we did a couple of laps, climbing over some natural and playground obstacles, and intermittently doing burpees.   The fitness levels present in the class were clearly diverse, from at least one elite level racer I spotted to those who clearly found even the warm up extremely challenging.  Kevin did a great job of keeping the group together but also making sure everyone kept moving, and also kept a really positive vibe going the whole time.  Lots of fun, and since I am what I’ve taken to calling a “gently aging athlete,” I really appreciate taking the time for a significant dynamic warm up before getting down to the more brutal business.

After jogging back to the gym Kevin began placing people at stations, initially outside the gym, using some of the natural and man-made landscape (using a concrete walls that had some grooves that could be used as foot and hand-holds to drill a traverse wall, using a lower barrier that was still high enough to have to be scrambled over, a section for folks doing squats, sprints, etc), and then inside the gym.  The stations inside the gym included jumping on and over progressively higher boxes (not sure of the height, but the highest was no higher than 3 feet), doing laps with a heavy sandbag, climbing over 6’ and 8’ walls (folks were welcome to attempt the 10’, but I only saw one fellow try and he couldn’t do it although he was over 6’.  Kevin, who’s no taller than me at 5’8” was able to do it to demonstrate, which I found super impressive).  There were also stations all around the cage contraption: practicing the Tyrolean Traverse, doing ring-dips, practicing the Hercules Hoist (make it harder by lying down and keeping your head on the ground…ouch!), climbing the cargo netting, practicing on an unstable floor-to-ceiling rope ladder, a knotted 1.5 inch rope, an unknotted 1.5 inch rope, and unknotted 2 inch rope, and an unknotted 1.5 inch rough hemp rope.

Kevin had all 17 of us on one station apiece and every few minutes would have us rotate to another stations and element.  17 folks spread out over the whole gym (including outside it) are a lot of folks to wrangle, and Kevin did a great job, being clear, encouraging, enthusiastic and giving some solid technical instruction.   In fact, he was basically running around the entire space for the whole hour, doing his best to be everywhere at once and very nearly succeeding.  I had a ball and was dripping with sweat after about 10 minutes on the stations. 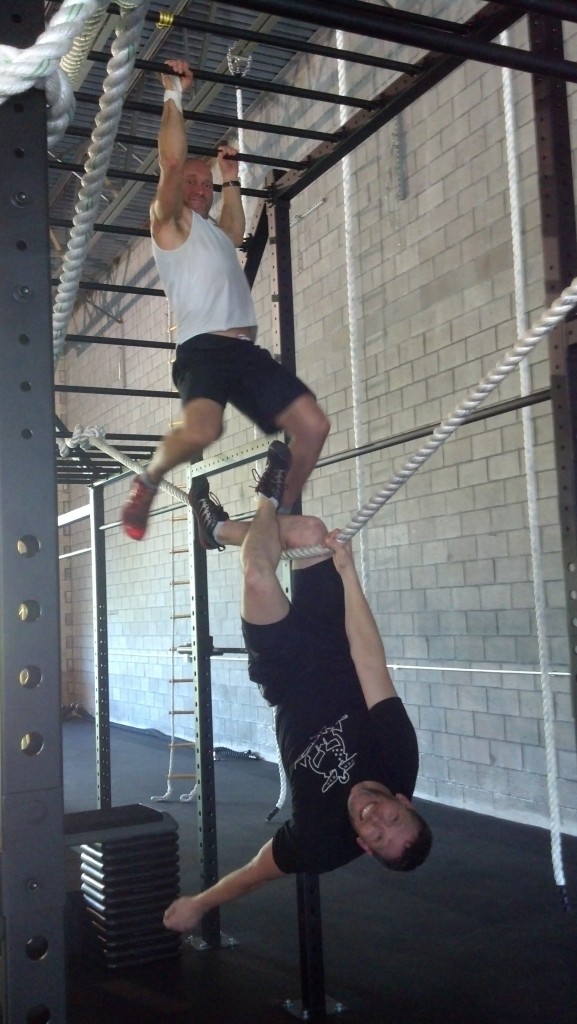 When the hour was up he led us through a bit of dynamic and static stretching and then invited anyone who wanted to do a bit of a workshop on the Cage.  He demonstrated a course through it where he went underneath hand-to-hand on the monkey bars the entire length (including two significant sections of pretty steep up and down angles), then bear-crawling over the top (more challenging than you might think when tilting downward), and then flipping onto the underside when reaching the end and going on one Tyrolean Traverse half-way, then switching, mid-climb, to another and continuing.  He then coached and encouraged all of us to take a turn and play on it.  By this time my already modest grip strength was flagging, but I crawled around that thing for an additional 20 minutes or so until I don’t even think I could do a hang, let alone a pull-up or two lengths of monkey bars.  I left extremely happy and sweaty.

Kevin has what sounds like some great plans for some additional elements, including getting a real traverse wall up, which will be a neat addition.  He also said that at present his OCR group classes are generally a lot smaller, closer to 5-10 folks generally, which allows for a lot more individualized work and technical coaching.  He also does a more conditioning based class at the gym (Ultimate Conditioning Mix), and a monthly trail running outdoor workout he calls “Ultra Beast Trail Run Workout,” which is a 10-mile trail run with obstacles and challenges worked in, aimed at helping folks get ready for the Spartan Beast, or similar longer races.

On top of all that Kevin is offering a special rate to his group classes to the NE Spahtens—They’re generally $15, but if you were a piece of NE Spahten gear it’s only $10.  For the time I had, an absolutely fantastic deal.

I’ve been on the lookout for a resource to work into training that has  some high quality instruction and capacity to practice some of the more technical elements present in Spartan Races and other OCR’s that are similar, like Superhero Scramble.  After a first taste of what he has to offer, Kevin Roy’s obstacle course race training offerings at Unleashed are most definitely in the running!  I’m most certainly heading back and highly recommend you get down there and check it out.

Tell him the Spahtens sent you!