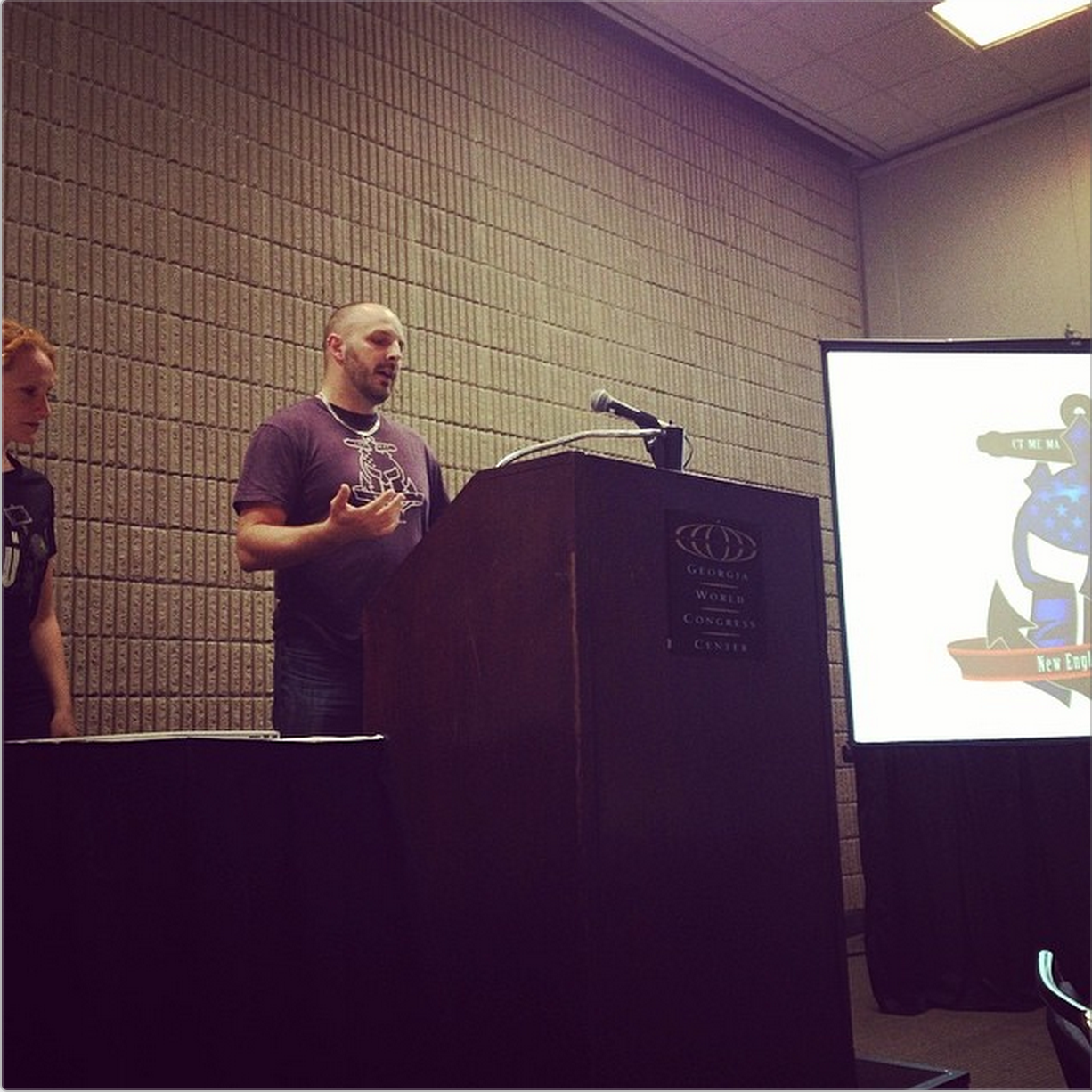 As many of you know, this past week I was invited to come out to Atlanta, GA and talk at the first USOCR conference.

Way back in January, I wasn’t sure how to approach these guys. USOCR are one of the new breed of OCR service providers, who are aiming to bring an element of safety, standards and professionalism to an industry that prides itself on being grass roots and raw, and pushing people to their limits and beyond. How they planned to change the direction, minds and hearts of athletes and race directors was a mystery to many of us, and I was certainly critical of them initially. Fortunately for us, Margaret Schlacter introduced me to Sam Mansfield, and several conversations later I was much more open to the idea that maybe something did need to happen for this sport to continue and thrive.

Thats how I found myself on a plane to GA to attend the USOCR conference.

It was immediately clear that they are serious. This isn’t being half assed. The email communications went out to a who’s who of the sport. Elites in attendance included Hunter McIntyre, Rose Wetzel-Sinnet, Margaret Schlachter, Hobie Call and David Magida. I was representing the New England Spahtens and was alongside Rachelanne Gladden of Team Sisu. Georgia Obstacle Racers and Mud Runners were represented, as was Obstacle Racing Media, OCR-WC and several Race Directors. There were also industry service providers presenting – from book publishers to supply companies and Esix insurance, a specialized sports and athlete insurance company who insure everything from elite athletes, sports governing bodies and stadiums. 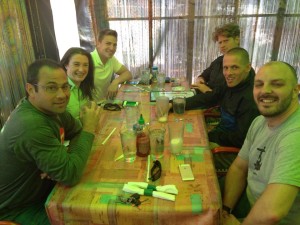 Now – I’ve been following this sport since day dot. I ran the second Spartan Race ever in 2010, and have followed the rise of the elites – from Margaret’s early days blogging about her training on Dirt in your Skirt, to Hobie’s incredible dominance of the sport and the famous $100k challenge given to him by Joe DeSena. I’ve also been around long enough to have seen them many times at races and events, and exchange “hellos” and even occasional Facebook or social media conversations with them on various topics. But, until you’ve sat alongside them in a restaurant, or hung out with them in a bar sharing a drink, you don’t really get to see just what incredibly nice people they all are. It was a pleasure hanging out with them for a few days, and the level of respect and high regard they hold our respective communities in was evident.

The conference itself was at times fascinating, controversial – and like all good conferences, ran late 🙂 We heard from timing companies and technology companies, lumber and paint suppliers and book publishers. 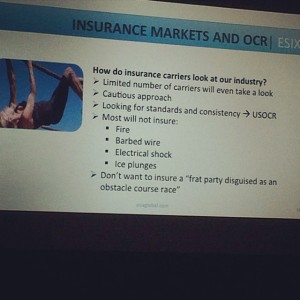 Arguable one of the most important presentations came from Esix. They provide insurance for sporting figures – from athletes to governing bodies to stadiums – and are the folks who are looking at the insurance needs of OCR in the future. For a start, OCR as we know it will end soon, as insurance contracts expire and law suits for previous injuries and claims pass through the courts. Multi-million dollar claims due to injury and death will hike premiums, see “dangerous” obstacles get removed (are we already seeing that with the demise of the Gladiators at Spartan Race?). It’s going to be essential for a race director to be able to show insurance carriers that they have built an obstacle as safe as possible, with focus and attention to injury prevention.

When it came to the turn of the communities, I had come into this with an idea – I wanted to make sure race directors saw us as a resource – we’re not just a big Facebook group they can sell tickets to, we’re a group of enthusiasts, experts and intelligent individuals who have much experience in this sport. We may have day jobs outside of OCR, but we can help them make their event more successful – wether thats in build work, volunteer work – or simply by bringing the party to their festival area. We have connections with local venues, other RDs, local sporting facilities and training venues and beyond. We discussed the #racelocal Grand Prix and how it’s brought local Race Directors together to work – rather than them operating as competitors against each other. FIT Challenge was given the spot light as an example of how collaborating with your local community in each market can only help. 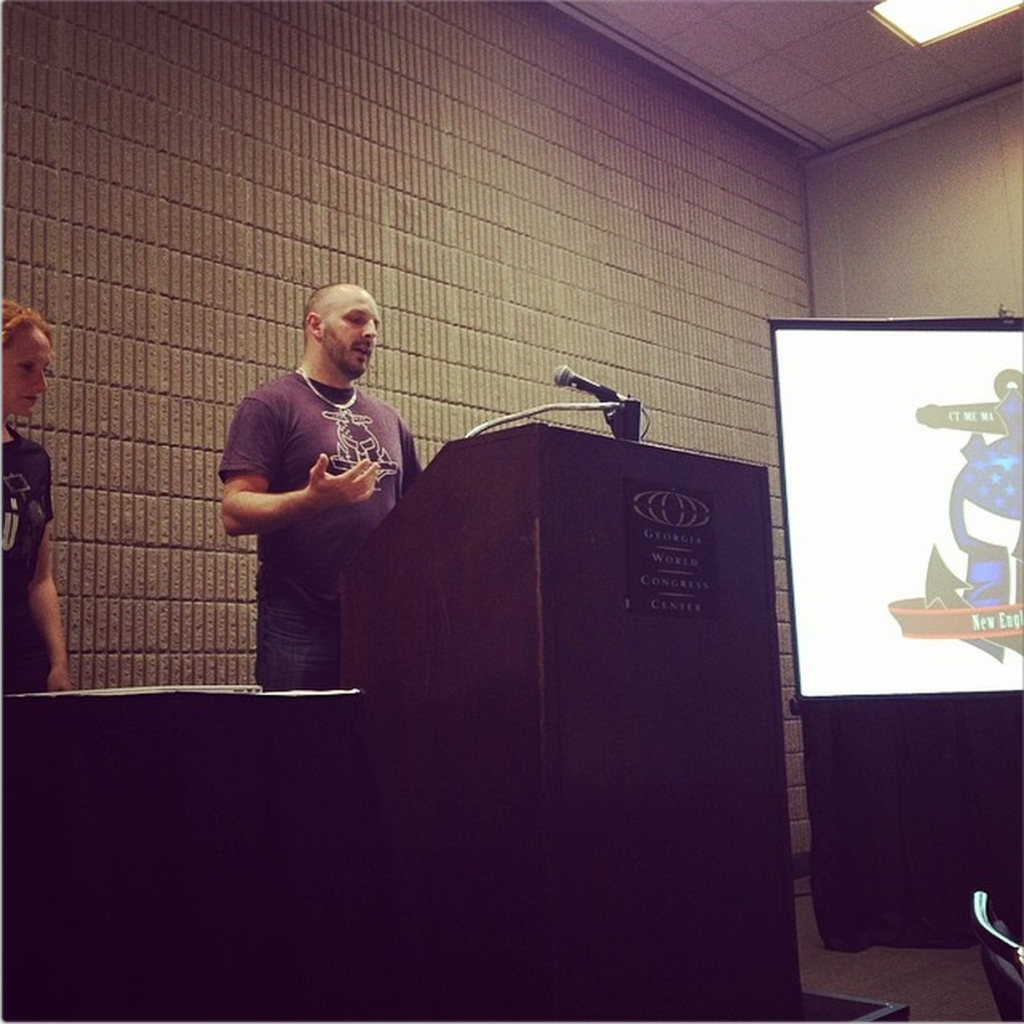 The last slide, I showed several team photos – each one taken at an event we topped 100 participants – I can only hope each RD in the room saw the value of that for their own event, regardless of where in the country they may be. 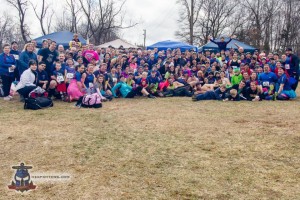 Team SISU presented next, and Rachelanne showed how they have created training and competitive events, and how well they work alongside their sister group, the Weeple Army. If you have any aspirations to finishing the Death Race, hook up with SISU and check out their Iron event – 10, 20 and 30 hour options that will get you pointed in the right direction for what to expect in VT.

At dinner that evening, we discussed what *we* had got out of the day. Each of us learned more about the industry – from what the elites are looking for to stay full time pro’s, to how much paint is needed at an event. I learned lots about how the Weeples and SISU are doing things in parallel to us, and lessons they’ve learned along the way. We made connections with each other, and shared many comedy moments along the way (#hotdogpanninni 4eva!).

But we weren’t there to learn from each other – we were there to help shape the future of the sport. We checked with Sam of USOCR to see if *he* got what he wanted from the day, and what his next steps are – and he assured us that he had – and was planning their next phase.

What will that be? It’s tough to say. USOCR has been very good at making progress (like putting on what we think is the first conference), without making noise. They haven’t said much publicly about their plans along the way, yet they managed to get a room full of athletes, communities and companies talking and sharing.

It did seem pretty clear though – the main threat to our sport in the foreseeable future is insurance costs and restrictions. This needs to be addressed on some level – and while the big three are large enough to weather the changes initially, the middle of the packers and local guys will be hurt first, and hurt most. USOCR aims to standardize safety requirements (which is not the same as standardizing obstacles, I hasten to add), and provide minimum requirements for entry to their program – and they are working with the right people to do this. From Esix insurance, to Home Depot, to STAT Medical and more.

OCR will change. OCR will have to change. I hope that this conference is the first step in that happening, because if it is – then the right people are driving it, and as a community leader, it’s clear we have a voice in that.